THE FLICKERING, DIMMING FLAME OF OUR RACIAL DESTINY 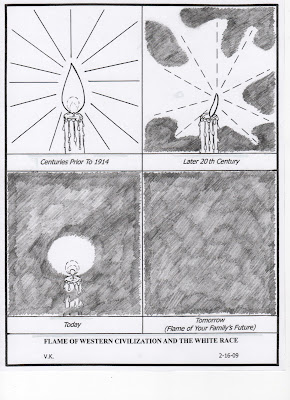 Yes, our marvelous scientific and technological advances still provide the best standard of living ever enjoyed by mankind. But the race of people primarily responsible for that -- our White race -- is now more than ever in real peril of being extinguished if we do not wake up and reclaim our rightful position on the world stage. The candle can burn brightly forever if we can just keep the atmosphere of our nations from being polluted by racial mixing; poisoned by darkness.

Posted by Val Koinen at 8:29 AM No comments:

A PRECARIOUS AND HUGELY EMBARRASSING STATE OF AFFAIRS

Aside from the lethal seriousness of it all -- the devastating reality of our situation and the dire straits we White people are now in -- it is just so terribly, maddeningly embarrassing and humiliating.

Organized Jewry (and no doubt many if not most individual Jews, for that matter) must be laughing their asses off every time more than a couple of them get together. And for good reason.

Due in large part to our good-heartedness, trusting nature, weak in-group identification, and (let’s face it) our unbelievable gullibility; and…

Using their street-smarts and general deviousness; their clannishness (strong tribal identification, other-group hostility, and in-group loyalties); their inherent dishonesty and skills at lying; their legendary capability for unmitigated gall (chutzpah); and their organized, synchronized massive efforts over the past hundred years or more -- and more particularly, their virtual control of government, the media, and public education here in America -- the Jews are now on the verge of literally and finally destroying the standing and powers of White people of European descent. Here in America, and in Europe as well. Bringing Western Civilization to its knees, as it were.

The humiliating part is that they have literally “talked us into” (and lied, hoodwinked, and bamboozled us into) our own defeat; our own destruction; our very own, largely suicidal downfall; our “genocide.” Our dispossession from our own lands (succumbing to the darker races); the destruction of our culture; the loss of our ability to govern ourselves in a responsible and rational manner; the loss of our ability to even teach our children who they are; and now, our financial ruin. I just have to think that this is a classic example of what is meant by the term “brainwashed.” Aided and abetted, of course, by our being bribed with the soft, easy, “good life” of materialism and consumerism for so long.

“How is that?” you ask. “Just what do you mean?” Do you have more specific examples of what you are writing about?”

Well, even though it is embarrassing to have to put the answers to those questions to paper, I’ll try to give you just a few of the more blatant examples that come to mind.

Through their power of the purse and their media control, the Jews have literally taken over our elections, legislation, the executive branch, and governing policies (both domestic and foreign). In essence, we’re letting them govern us and the result in many ways is that our nation now acts in the interest of Israeli and Jewish policy (“what‘s good for Jews”), not America’s interests (and certainly not in furtherance of White American interests). The alien Jew is now in control, and “not a shot was fired” (not that I advocate anybody illegally shooting anybody, because I don’t). For that matter, virtually no real dissent was even voiced, or heard. Amazing!

They talked our government into forcing our young men to fight and die in World Wars I and II, primarily for their interests as it turned out. And the sacrifice of our blood and money on wars for Israel continues with the so-called “war on terror” and the fighting in Iraq and Afghanistan. (How about this as a recruiting slogan, White American: “Send your sons to fight and die for Israel! Oh, and don’t forget to give each of them a bagful of money before you ship them out so they can drop it off in Tel Aviv on their way to the battlefield!”)

As only one example of the ways in which they have distorted and falsified the history of WW II and its aftermath, the Jews have so successfully foisted the “holocaust” hoax upon us (Americans, Germans, and others) that it has cost us hundreds of millions of dollars of extortion money and has resulted in the absolute, total brainwashing of our children with regard to this non-event. That’s really something, when you think about it. Now, let’s work even harder so we can pay more taxes and build them a bunch more holocaust-worship temples, er… museums!

Why, they even got most of us to believe that “tall tale” about a few crazy Muslims with boxcutters using hijacked airliners to bring down the World Trade Center towers on September 11, 2001. Man, if you believe that, have I got a deal for you…

By their efforts to enact immigration law and influence our immigration policies, they suckered us into bringing so many non-Whites into the country that we Whites will be a minority of the total American population in just 30 years or so. In fact, we are already a minority in many parts of the country, and the next generation -- our children -- are rapidly and increasingly becoming greatly outnumbered in many places. Just think about that, keeping in mind that we comprised nearly 90 percent of the population as recently as 1960, less than 50 years ago. Wow! The nation’s founders and the Revolutionary Minutemen risked everything and fought for our new nation and freedoms; our ancestors fought the Mexicans at the Alamo; our pioneering forefathers fought native savages to conquer and settle the frontier. But now, thanks in large part to the Jews’ tireless efforts, we are giving our nation away to imported Somalian blacks (as well as our home-grown ghetto Negroes) and south-of-the-border, “reconquista”-minded Mestizos!

We’ve let the Jews de-Europeanize, Negrify, and load our popular culture down with gratuitous sex, juvenile sexuality, pornography, and other kinds of filth to the extent that when we turn on the TV or go to a movie or tune in to a radio music station there is almost nothing left of our culture -- wholesome White culture. (Yeah, right -- jumping and bumping and grinding to a drumbeat has been our way of dancing forever, just like those culturally advanced black people in darkest Africa. Go for it, kids!)

We take money out of our pockets (and literally, food out of the mouths of our children and the clothes off their backs) so we can send billions of dollars each year to Israeli Jews. That’s rich, isn’t it? (Well, it is, for them at least.)

We’ve let them so alter our society -- through such things as Jew instigated and promoted “feminism,” “political correctness,” liberalism, diversity and multi-culturism (including race-mixing), egalitarianism, universal altruism, and teaching our children “White guilt” -- that our families have been irreparably weakened and many of our kids are out of control and no longer have any sense of racial identity or pride whatsoever. Why, they even told us that we and the Negroes are “all the same under the skin,” and huge numbers of our people actually believe that nonsense. (Oh, yeah, right. Makes sense to me. Don’t give me all that crap about their lower IQs; high crime rates; high level of AIDS and other VD infections; propensity for wild, animalistic behavior; and their historical failure to invent the wheel or a written language, or to build [or even just maintain] a civilized government or a building more complex than a grass and mud hut. What the hell does all that stuff matter, anyway? Just look how cool that rappin’ black dude is with all his bling, in his backward baseball cap and with his baggy pants hanging off his ass. Yeah, that’s what I want my son to be emulating and my daughter to be eye-ballin’. And hey, maybe my grandkids can have dark skin, kinky hair, thick lips, and low IQs.)

And we are just now finding out how the clever Jews (and their greedy gentile fellow-travelers) have been screwing us over financially (think Bernie Madoff). And what are we doing about it? Why, we’re handing many of the very same culprits -- thieves every one -- hundreds of billions of dollars so their lives won’t be disrupted all that much, that’s what! Take that, you scheming Jews! Hahahaha! Guess we taught you a lesson this time!

But some would still say we haven’t yet done nearly enough for the pooor, pooor Jews. Well I know what would make them happy (maybe for Christmas next year?). We could weaken the Whites’ position in America even more with yet another vast wealth redistribution program by giving our Negroes tons of money (tons more than we already give them day in and day out) for “slavery reparations.” (You’d better believe it -- with the “magic mulatto messiah” Obama at the helm, that one is closer than you think!) Or, maybe even better -- we could bomb Iran -- they (the Zionist and neocon Jews) would really like that!

Tell you what, White Americans -- some of you may call yourselves “white supremacists,” but the way I see things, it is pretty damned hard to think of our people as being superior to anyone so long as we continue to let “organized Jewry” screw us over like this. We don’t seem to even have any natural instinct or ability or the guts any more to fight for our most basic interests -- or for our very survival as a people, for crying out loud -- as every other successful natural organism on the planet (including other sub-species [races] of humankind) has done from time immemorial.

What in the world have we become, as a people? What kind of people are we anyway?

It’s just mind-boggling! It makes me shudder just to contemplate the truthful answers to those questions! We’re sure as hell not the same caliber of men as Alexander the Great, Leonidas and the Spartans of Thermopylae, Charles Martel of the Battle of Tours, George Washington, Davy Crockett, Charles Lindbergh, or countless other smart, brave White men of days gone by!

Oh, and by the way -- thanks a lot, Jews -- way to go! You do seem to be on the verge of victory (though sure as hell, you’re going to regret getting what you have wished for).

Postscript: For the incredulous, the outraged, and the skeptics that read this -- and I hope there are many of you -- all I would ask is that you study these issues for yourselves and try to learn the truth before you shoot this messenger (or shoot your mouths off too much). What you discover just might surprise you.
Posted by Val Koinen at 1:59 PM No comments: