THE TRUTH IS STARING YOU IN THE FACE

It's really amazing.  For years you have been wandering around in a daze, as in a fog.  And then all of a sudden the light pops on and it hits you and there is the truth, right in front of your eyes.  And you realize that all this time all you had to do was open your eyes and your mind, do a little reading, and just refuse to let others tell you how to think.

And perhaps the best thing:  You now realize that learning/knowing/living the truth is fun, easy, and enormously satisfying.  It is the key to real freedom.  And it's all free or easily affordable!

But no longer; no more.  Now, armed with the truth, and with your new awareness of these things and more -- you can get to work by joining the efforts to save your people -- the White race -- from genocide at the hands of the complicit and culpable Jews and their colored minions.  To help save our culture, our Western Civilization, our cities and nations, our women and children, and our very existence.

You can grow your awareness by studying, online, sites like this one and those listed in the blogroll on the right sidebar.  And the many others provided on those other blogs and websites.  And by reading the books listed and others you can find online.  And perhaps most important of all -- you will then be in a good position to inform your friends and family of the truth, and of the proofs of that truth.

It really is (or at least it can be) a bright and beautiful world out there once we begin to learn and follow the truth, and live up to our natural and righteous potential.  Welcome aboard!

Posted by Val Koinen at 1:22 PM No comments:

OUR CHOICE: TO HONOR OUR HERITAGE OR SALUTE THEIR SODOMY 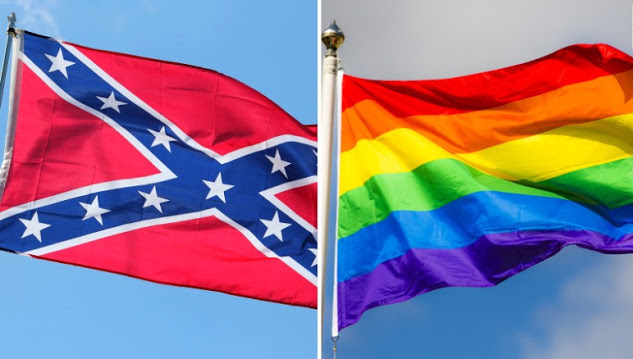 It reeks of the abandonment of our history and our right to honor those who have gone before us; of our culture and values.  Of a torturous reversal of heterosexual standards of natural, normal behavior.  Of a testament to the misguided worship of the Negro underclass.  Of a testament to the admiration and acceptance of sexual deviance, filth, and perversity. Of social pathology.  Of insanity.

It is a putrid display of the ways in which we Whites have come to grovel before the interests and demands of the hostile, anti-White 'others.'

In actuality, it symbolizes our near-total capitulation -- surrender -- to the sick, non-White dominated and morally perverse society conceived and engineered by the Jewish destroyers of Western Civilization.

Even the description of the nonsensical, idiotic conceptualization of the so-called 'LGBT pride rainbow flag' displays a ridiculous reversal of reality concocted for its propaganda value.  What a huge lie to be foisted upon the young people of America.  There is no legitimate 'pride' here.  This is a banner that represents perversion, filth, sickness, disgust, and shame.  I would suggest:


This disgusting rag should be spat upon and trod upon, not promoted to our children as a wondrous symbol of a glorious and revered 'alternate lifestyle'!

Posted by Val Koinen at 9:29 PM No comments:

THE NAMES, FACES, AND WORDS OF THE JEWISH WHITE-GENOCIDE PROJECT

Some from the past, some from the present ... an enlightening and nauseating compilation of genocidal desire, motivation, intent, and premeditation:

When is it Enough? by Axe of Perun on RenegadeTribune.com

The statements of these Jews (and a few of their brownskin cousins and White race-traitor henchmen) are tantamount to confessions of complicity in the horrendous, centuries-old and ongoing Jewish effort to kill off the White race and destroy our Western Civilization.

And do you know what is really scary and infuriating?  The fact that this is just a tiny 'sampler' -- there are more -- many, many more -- examples of Jews gloating over their efforts at and success in destroying White culture, the White genome, White nations, and the White people themselves.

SUICIDAL WHITE SOCIETIES ALL AROUND THE WORLD

In my most recent post (here) I provided a brief spintro and a link to a recent essay by Pat Buchanan
which examines the deteriorating stature (and prestige, and influence, and power) of American White people (and particularly of White men).

Since then, I have come across several other articles which drove home numerous related aspects of that same message -- the declining vitality and social/political health of our White people here in America, which was once not so long ago recognized as one of the greatest nations on the planet (and not coincidentally, essentially a White nation).  And not just in America -- the degradation of White societies, destruction of White nations, and White racial suicide/genocide are rapidly gaining momentum in other parts of the world as well.

And that set me to thinking (for the umpteenth time):  If we Whites do not do something about our dire situation, do something substantive, and do it now, we and our progeny are facing a very bleak future indeed in these, what once were our, countries.

If you read, or even just scan these articles I think you will very quickly see what I am writing about and will understand my concerns.

Maybe the problem is at least partly a result of the way we raise our children.  And more to the point, the way so many Americans remain intellectual and social children well into adulthood.  First up is this article, written by a psychiatrist, which makes a pretty convincing case to that effect.

Looking further into the topic of the 'ruination' of White people in America, and especially of White males, this article makes it clear that the 'beatdown' of our people that is so much in vogue these days continues well beyond the way we raise our children.  It is an actively pursued obsession of so many of the leftist professors in our colleges and universities, all too many of whom are (surprise, surprise) either non-White or of the Jewish persuasion.  It seems that being 'White' is tantamount to being worthless, racist, cruel, evil, exploitative, and on and on ad nauseam; whereas we are literally required to exalt, glorify, support, and extend special status and favors to members of just about every other group -- non-Whites of all shades, radical feminists, sexual deviants and perverts; you name it.

Fred Reed offers some additional insightful commentary about our colleges and today's college students, even many of the White ones, in this article.

So then, what are the consequences of our people being 'the way they are'?  Paul Craig Roberts provides some of the answers in this essay, with regard to the national, governmental, and international arenas.  Frightening stuff.  Even without a single reference to Jews, Israelis, or the Israel Lobby (oh, yeah, in one place he does refer to the Zionist, ultra-wealthy, supposed Donald Trump backer Sheldon Adelson, but Roberts doesn't specifically identify him as the Jew he is, or bother to mention all the other wealthy Jews backing Clinton (including George Soros and Haim Saban), or the fact that openly socialist Bernie Sanders is a Jew).

Here is a more specific current example of just one of the ways in which our U.S. government under the anti-White mulatto Obama is constantly trying to suppress the interests of our still-majority Whites in favor of darkies, feminists, perverts, Jews, and any other minority you can think of.  A slightly different version of the same topic here, with additional interesting commentary.  This, I would submit, is typical of the kind of disgusting and deadly situation our declining stature, which results in large part from our lack of realistic thinking, mental toughness, and intestinal fortitude, has led to.

On the international scene, this short article points out the fallacy of blaming others for the tragic results of our own White modernity of stupidity, laziness, and weakness when it comes to the ongoing invasion of alien 'others' (specifically the Muslim invasion of Europe but by extension our own American problem of allowing ourselves to be invaded by mestizos, ever more Negroes [uncivilized Africans], Muslims, and Asians of all stripes).

With regard to that last article, it seems to me worth mentioning that the same kind of reasoning would apply to our being conquered and genocided by the Jews.  We can blame the Jews, because they are deserving of blame.  We can hate them, because any enemy that is so hell-bent on (and successful at) destroying our societies and our people is deserving of that hatred.  But ultimately, we need to blame ourselves as well because it is we Whites ourselves who have let the Jews get away with all their manifest efforts to destroy us.

And finally, from way 'down under' in Australia, here is one more article that exposes the ways in which a White majority society, betrayed by the ever-present Jew nation-wreckers and their traitorous White politician henchmen, is allowing itself to be brutalized by alien invaders -- in this case savage African 'immigrants.'  Once again, though, it must be recognized that it is the White Australians themselves who, just like the White people of North America and Europe, have become such irrational, unrealistic, weak, and cowardly fools that they have allowed this terrible situation to develop.

Please, take the time to read these articles.  Then think about it.  And then do your best to pass it on and spread the word.
Posted by Val Koinen at 12:32 PM 1 comment: